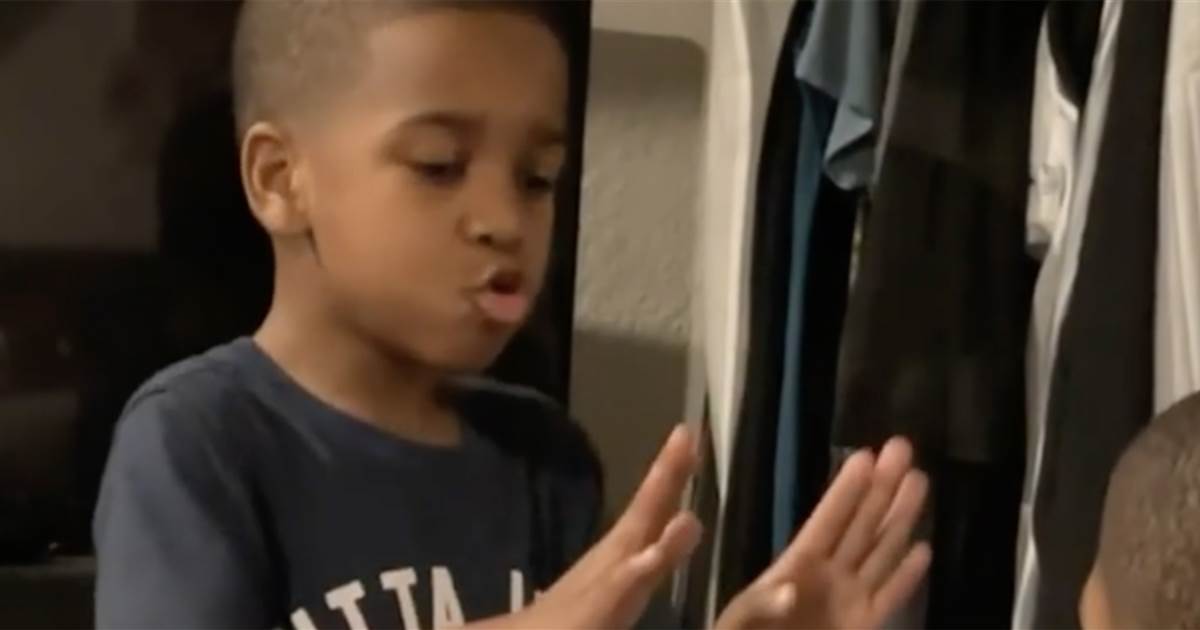 Most parents are at a loss when it comes to stopping their child’s temper tantrum, but this 6-year-old boy knew a trick to calm his little brother down and it’s the definition of brotherly love.

Ashley West, 30, of Los Angeles, California saw her middle son, Noah, using a breathing technique on his little brother, Cory, 4, who was on the verge of a meltdown and quickly decided to film the special moment. The clip of her little guy helping his brother calm down quickly went viral on Twitter last Sunday, and was then shared across other social media platforms. (It even became Hoda’s Morning Boost on Tuesday!)

Watch this 6-year-old calm his little brother down

“Okay so… I really was not expecting this video to blow up the way it did !” West posted on Instagram on Tuesday. “If you know me then you know the kids and I are ALWAYS meditating and practicing controlling our breathing / managing our emotions.”

West told TODAY Parents that that the breathing technique her son demonstrates in the video is something that’s really come in handy during the pandemic.

“Coping during COVID has been stressful as a stay home parent and graduate student,” said West, who is working toward a masters in social work at USC. “I do yoga and meditate as a form of release and relief as well as exercise. The kids will sometimes join me but they definitely watch me all the time.”

In the short video, Cory is on the verge of a tantrum due to the fact that his Nintendo is not charged. Noah heads off the situation by engaging his little brother and demonstrating the breathing, inhaling through his nose and exhaling through his mouth. “Breathe,” he says, gaining Cory’s undivided attention. When the little guy calms down, he gives him a pat on the shoulder. “See it helps you calm down,” he says.

“Noah’s temperament used to be extremely bad,” she said of her middle son. “I’ve made a habit out of encouraging them to stop, and take a few breaths when they are upset and angry, or when their emotions are heightened.”

And although Noah has the techniques to help himself under his belt, West was surprised to see him using them on his brother.

“Noah will usually stop and talk to himself when he is angry or upset and tell himself to calm down, but in that moment seeing him co-regulate with his brother was a first for me which prompted me to record it,” she said.

West said she learned these calming techniques from working with psychologists and behavioral therapists as a social worker and thought she could apply the principles in her own home to address her kids’ negative and undesired behaviors.

“They don’t 100% have it down but I have noticed a lot of improvement with their behaviors and attitudes since introducing them to this exercise,” she said.

Video has since been shared across multiple social media platforms and has melted the heart of pretty much anyone who has viewed it.

“They are always looking out for one another.”

“I was definitely shocked to see the video spread so quickly,” said West. “I have received thousands of messages from parents, professional and media outlets telling me what a wonderful feeling they had watching my kiddo’s positive reinforcement with his brother. People from literally all over the world — Israel, Canada, Singapore, U.K. — all saying how they loved it and feel inspired which is one extremely positive and heartwarming feeling to have as a parent.”

And although the video is incredibly sweet, West said that her sons act like normal brothers most of the time. “They fight and bicker like normal siblings do but they are also absolutely the best of friends,” she said. “I encourage them to believe and move as if they are each other’s ‘keepers’ and they do — they are always looking out for one another.”